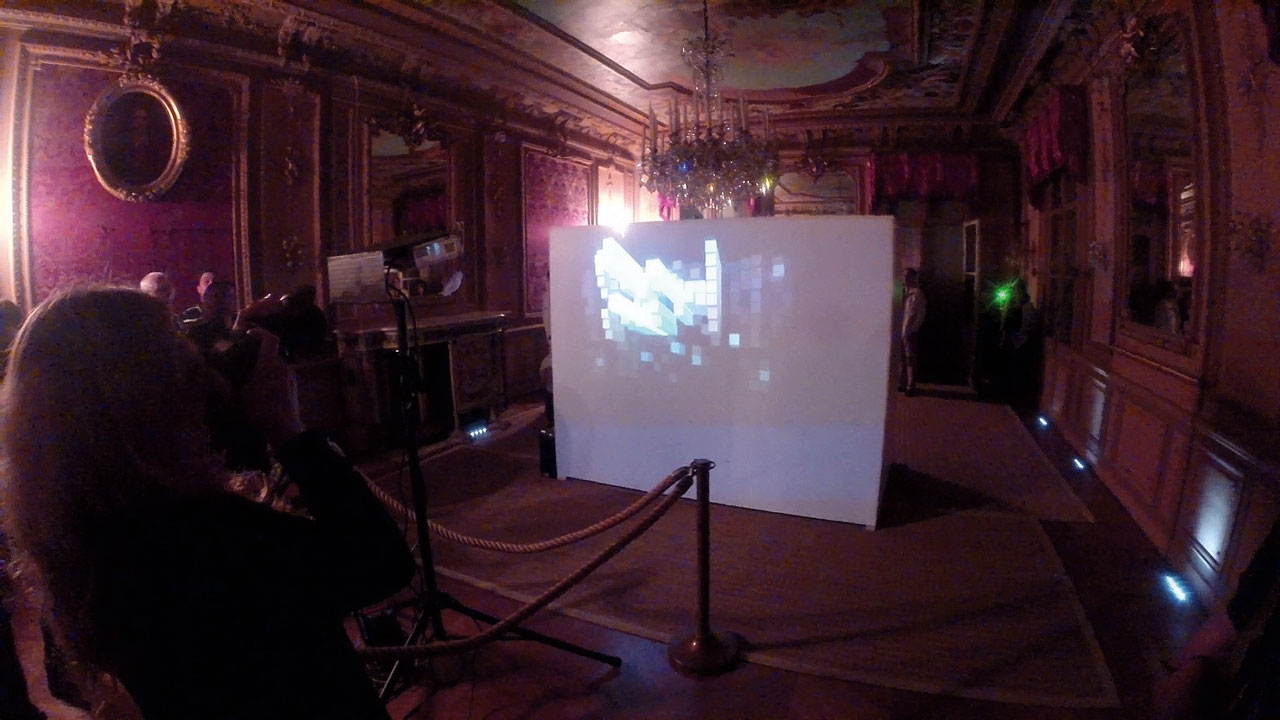 Reflection is a projected video installation, its title uses the polysemy of the term. First of all, with its video capture system, it visually restores the space in which it is exposed like a mirror. Then, in a second time, it testifies of the path of thoughts which led me to its elaboration, reflections on our conscience of time, on the nature of time.

Reflection consists mainly of a program that captures images in real time for analysis. The program interprets the differences in brightness and cuts the video capture into a number of faces. It places these faces on cubes in a 3D space by placing the brightest cubes in front.

This installation questions our relationship to time, it retransmits video cubes with a delay of about ten seconds. Thus the image of the spectator is first captured by the device before he becomes aware that this capture is retransmitted.

This process of capture in real time and retransmission in deferred time which is a reference to Going Around The Corner by Bruce Nauman or Present Continuous Past(s) by Dan Graham, where the feeling of the duration developed by Bergson in the Creative Evolution (with the example of the sugar which melts in the water) is put in abyss. Indeed, in this book Bergson hypothesizes that objects and things have a duration similar to our inner duration.

“Let us relax now, let us interrupt the effort that pushes into the present as much of the past as possible. If the relaxation were complete, there would be neither memory nor will: this means that we never fall into this absolute passivity, nor can we make ourselves absolutely free. But at the limit, we glimpse an existence made of a present which would start again and again, no more real duration, nothing but the instantaneous which dies and is reborn indefinitely. Is this the existence of matter? Not quite, no doubt, because the analysis resolves it into elementary shocks, the shortest of which are of a very weak duration, almost fading, but not null. One can nevertheless presume that the physical existence inclines in this second direction, as the psychic existence in the first.”