The starting point for this project is a group of residential buildings. Each façade, each plane, is altered by a program that duplicates portions of the image on a random axis. Each time this phenomenon occurs, a sample, this time sound, is played by the program.

The sequences are thus orchestrated in a synchronous manner between the alteration of an image and the triggering of a sound. This process is repeated in a parallel montage between several locations as if a phenomenon were occurring at the same time in different places.

The sequences alternate between different buildings (Hong Kong, San Francisco, Guangzhou, Shanghai, Chicago). The alteration continues, this process is irreversible because from a certain point where the programme has used all the sources of images available to it, it will replace the original image with an image that it has produced itself. It is a machine that runs on empty and in which each photograph is exhausted by its own copy.

The habitat is segmented, contracted, until it no longer becomes a reality but a representation. Halfway between a science fiction illustration and a constructivist painting, this experimental animation shows the construction of a painting that never stands still. 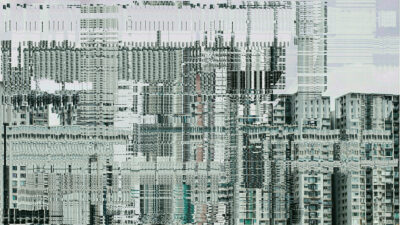 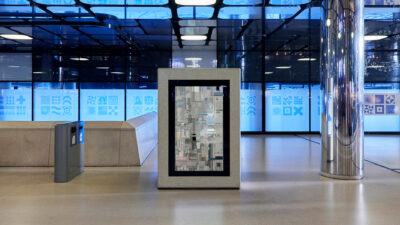