This project, which connects pencil drawing and coding, speaks about knowledge, this group of men is constituted of inventors, scientists, philosophers and writers. They represent differents kind of knowledge. 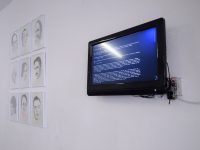 The digital side of this works uses the look and features of a chat or instant messaging.

The internal function of the chat is corrupted: the different protagonists are not connected right now to the interface. They exist or, in most case, they existed, theirs comments come from archives, then, this chat is not instant, at least, only screen events or animations are directs because these texts existed before the creation of this chat. These messages are chosen by an algorithm to be displayed. This basic artificial intelligence shows us writings of clever persons.

How can we imagine the dialogue or at least these exchanges of comments?

Firstly, even if a text existed, this exchange between these different authors is less clear, for some of them, whose didn’t live at the same time, we can imagine the exchange as nonmutual, previous text can reach the more recent author but not the other way. That is exactly what this program indicates, so, it depicts a temporal discontinuity, we can imagine the place where authors discuss as a utopia, in the etymological meaning: a non place.
The purpose of this piece is also differents evolutions of the internet, this is a step backward.
Chat is a concept of the web 2.0, the one of social network and interactivity but I used the first version of it, the internet as archive or place to share knowledge, to build a fake chat, a social network parody.

In fact, there are two thinkings about technologies, two sides on the author list, the first group think, as modernist, that technologies can help the human being to live better, bring wit to everybody, this vision see it as a hope. The second group, see the technologies as a threat, as a way for company and government to spy and control us.